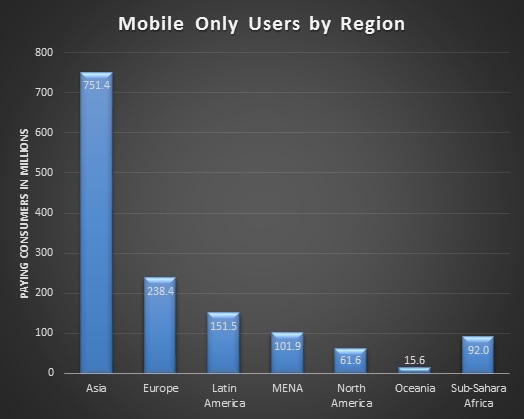 DFC Intelligence recently released its latest global video game consumer segmentation.  This report looks at the total worldwide number of paying video game consumers.  As we mentioned last week, this number has soared past 3 billion.  However, a large percentage of these users only use mobile devices to play games.  Many products will only focus on the approximately 350 million consumers that play high-end PC and console games.

One of the biggest mistake’s companies can make is buying into the hype over how much the video game market has expanded.  The market has grown significantly, but the total addressable market (TAM) for any given product is likely to be more limited than many imagine.  At DFC we see many unrealistic business plans that cite wide-eyed, unrealistic addressable market sizes.

Among the 3.2 billion consumers that buy video games, 1.4 billion ONLY pay for games on mobile devices, either smartphones or tablets.  This is a fast-growing market segment but it has very little overlap with the traditional video game market.  Furthermore, business plans that rely on cross-platform market appeal are always suspect. 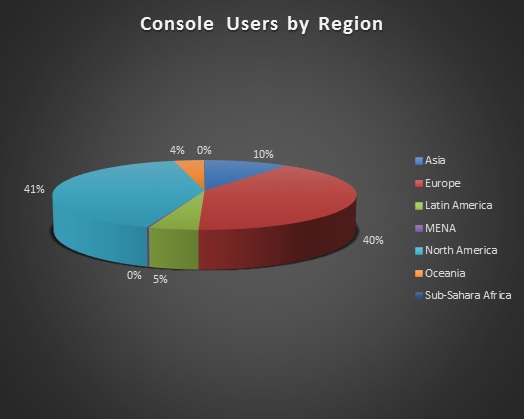 Among core gamers, the PC and console platforms are primary.  Many users play on mobile devices, but more as a secondary option.  For example, many of our focus users gripe about when they have to play Minecraft or Fortnite on a mobile device.

In recent years there has not been a great deal of expansion in the console game market.  There are an estimated 250 million core console game consumers worldwide.  Over 200 million of these consumers are in North America or Europe (mostly Western Europe).

The PC game market is larger and more diverse.  There is a major market in Asia that does have significant overlap with mobile games.  However, the Asia market for PC games requires separate analysis from the North American, South American and European market.

Once again, many business plans throw in China and other parts of Asia as an opportunity.  China is the largest market for games and has the largest number of video game consumers.  However, not only is the average revenue per user much lower in China, but market entry into China is an entire separate issue.  For most products, China should not even be considered in the initial TAM.

The reality is that worldwide there are about 350 million video game consumers that can be targeted for a high-end game.  That is slightly more than about 10% of the global market.  However, most products will target a smaller segment of less than 10% of that 10%.

With a huge global game market, the challenge of segmentation has become more difficult than it was in the past.  As always companies that are better with TAM, SAM and SOM analysis have a big advantage.

Over the years, we have been surprised at the number of videogame executives that give us blank stares when we throw out terms like TAM.  However, the bigger problem is the number of unrealistic investor pitches.

DFC Intelligence tries to err on the conservative side when it comes to market forecasting.  So, when we throw out a number like 3.2 billion worldwide video game consumers, we do so with caution.  Yes, it is a big market at over $200 billion a year in consumer spending.  However, it is possible more than $200 billion is lost by companies chasing those consumers.