In early December, DFC Intelligence released its latest video game market forecast. One caveat was that we noted the Nintendo Switch would need an extremely strong December to reach our estimates. We can now report that December Nintendo Switch sales were excellent.

Throughout most of 2018, sales of the Nintendo Switch had been sluggish. However, the Switch is targeted towards a younger audience that often gets the system as a gift. In other words, sales tend to be packed into the holiday season.

Throughout 2018, DFC tracked Nintendo struggles as the stock price declined. However, we were very bullish on Super Smash Bros Ultimate as an end of year hardware driver.  In the end, our analysis proved correct. Sales of the Nintendo Switch crushed the competition in December and the system reached our forecast of 10 million total sales in the U.S. since launch.

Nintendo of America (citing NPD data) rightly bragged about their December performance in the U.S. They noted that the Switch sold more units than the PlayStation 4 and Xbox One combined. In addition, sales for the Switch in December were better than any system this hardware generation.

Investors have taken note and the stock has shown a nice increase in January. DFC analyst David Cole was quoted in a recent Japanese Bloomberg article on the increase the English version is here.

Nevertheless, this does not change our overall assessment of Nintendo and the Switch. DFC forecasts that 2018 was the peak year for the Switch. On January 31, Nintendo will report its earnings. The company had forecasted that they would ship 20 million units for fiscal year 2019, ending March 31.

During the first six months of fiscal 2019, the Nintendo Switch shipped 5 million units. So, for the second half of the year, Nintendo needs to sell 15 million systems. Like most analysts, DFC believes that Nintendo will fall short of this goal.

The reality is that investors are looking for Nintendo to expand its audience. The Switch is a successful system but it is selling primarily to an established base. Bringing Nintendo products to smartphones is seen as the major growth way to reach a new audience.

Mario Kart Tour is Nintendo’s next big mobile launch. It is scheduled for release in fiscal 2019, which ends in only two months. DFC has been tempering investor expectations for this product for some time. Nevertheless, it is clear many investors are looking at this product as a key indicator of Nintendo’s growth prospects.

Overall, we think that Nintendo stock is starting to settle in a $40 price range. Nintendo has great IP, a strong balance sheet and a solid customer base. The stock has seen some wild roller coaster rides, driven by unrealistic expectations. In the end, Nintendo is best seen as a consistent long-term earner, that will bounce back after having its down years.

MAY 13, 2014 • The dominant mobile phone carrier in Japan, NTT Docomo, Inc., is initiating technology trials to prepare for the… 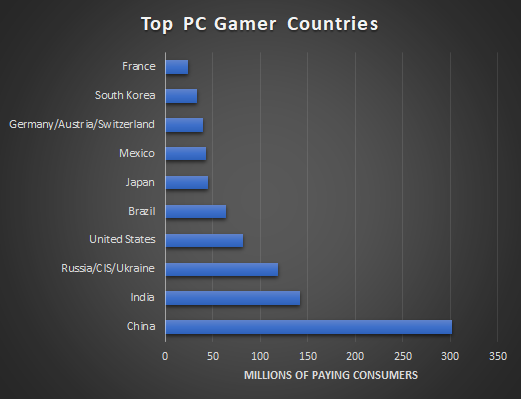 DEC. 15, 2010 • DFC Intelligence has tended to focus on looking at markets by country and platform. This is obviously an…