In the past few months, a big topic for DFC Intelligence analysts has been investor concern over the fate of big game publishers Electronic Arts and Activision Blizzard.  This issue really came to a head with the announcement that Bungie, developer of the Destiny franchise, was making a break from its publisher Activision.  What exactly does this announcement say about the future of a company like Activision Blizzard?  To be cute, in other words, what is the destiny of Activision?

DFC Intelligence analyst David Cole was interviewed in a recent article by GameDaily.biz on the breakup of Activision and Bungie.  You can see the article here.  However, it is important to stress that this is much more than another news story.  It is a harbinger of major changes in the video game industry landscape.

Bungie was the developer behind Microsoft’s massive hit Halo franchise.  Until 2007, Microsoft actually owned Bungie.  Bungie became independent right after the launch of Halo 3.  In 2010, Bungie announced a 10-year publishing deal with Activision Blizzard.  Under terms of the deal, Bungie retained the rights to its IP.

The new IP from Bungie was a franchise called Destiny.  The original Destiny had a huge launch in the fall of 2014.  However, reviews were somewhat mixed, and many saw the initial Destiny as a disappointment.

The goal of the Destiny franchise was to provide a living game with ongoing content.  However, from the start there was concern about Destiny’s loot system that favored experienced players and/or people that paid a lot of money to become good.  See this article from Forbes shortly after the game’s release.

Destiny got regular updates until a sequel was launched in the fall of 2017.  Destiny 2 started off to better reviews and even better sales than the original.  However, the buzz over Destiny 2 seemed to quickly die off.  In December 2017, the expansion the Curse of Osiris was widely panned.

Polygon did a good end of the year 2018 wrap up about the struggles Destiny 2 has faced.  This article, written a week before the break between Activision and Bungie, described Destiny 2 as a game on the upswing after the release of the Forsaken expansion in September 2018.  But they also concluded:

Even with these past few months of positivity, it’s hard to look back on this year of Destiny 2 and not see a troubled game.

So, the seeds had been set for several years for discontentment to rise between Bungie and Activision.  We were surprised by the announcement because as the Polygon article mentioned, recent months had seen an improvement in Destiny 2.  Nevertheless, it had been clear since the launch of the original game that Destiny was a troubled franchise.  In November, Activision even cited a disappointing launch of Destiny 2 Forsaken as why they struggled to meet earnings. 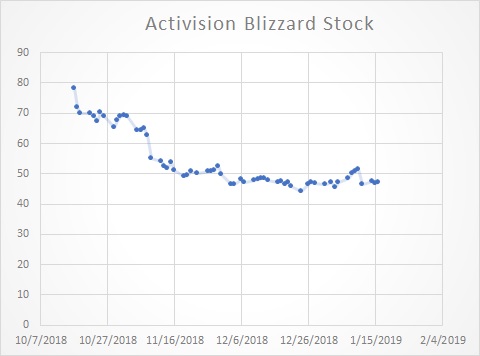 Many analysts expressed surprise that Bungie got the rights to the Destiny IP.  However, it was clearly stated in the original 10-year agreement back in 2010 that Bungie owned Destiny.  There was only about a year to go on the 10-year period.  Valuing Destiny as a core Activision franchise was already troubled.

The more meaningful issue is what does this say about the ability of large publishers like Activision Blizzard and Electronic Arts to compete in a world where the strategic focus of the game industry is rapidly changing?  The ironically titled Destiny says a great deal about the future.

For years, Activision, Electronic Arts have talked about moving from a physical business to a digital business.  However, it is much more than that.  It is about the movement to games-as-a-service and even the inevitability of streaming game services.  In these areas, the traditional game publishers are fairly weak.

The movement to games-as-a-service and streaming games are issues that have been huge topics of recent DFC Intelligence research.  In October 2018, DFC published the Business of Video Games report where we specifically talked about the challenge’s publishers like Activision Blizzard and Electronic Arts faced.  We even wrote a piece about how both companies are making investments in the space.

The big issue is that the core audience of both ATVI and EA are a gamer group that is not really fond of the games-as-a-service model.  When Activision merged with Blizzard over 10 years ago, they became a major player in ongoing digital revenue.  However, this model paled in comparison to what could be earned by the Asian business model and the model for mobile games like Candy Crush Saga (acquired by ATVI).

The problem is those models do not translate to the primary Activision or Blizzard audience.  Witness the outcry over the announcement of a mobile version of Diablo at BlizzCon in November 2018.  The game, Diablo: Immortal, is being developed with NetEase.  NetEase is a Chinese company well noted for its manipulative techniques to get users to pay for games.

The reaction from Blizzard fans was overwhelmingly negative.  By January the official YouTube trailer for Diablo: Immortal had been viewed 5.3 million times.  A whopping 723,000 people hit the dislike button.  This was 27 dislikes for every like.

That, in a nutshell, is the issue faced by companies like Activision Blizzard and Electronic Arts.  Their current audience is simply not buying into new digital business models.  The past few months have been hard for almost all stocks.  However, with the Bungie split, investors are now expressing more long-term concerns. 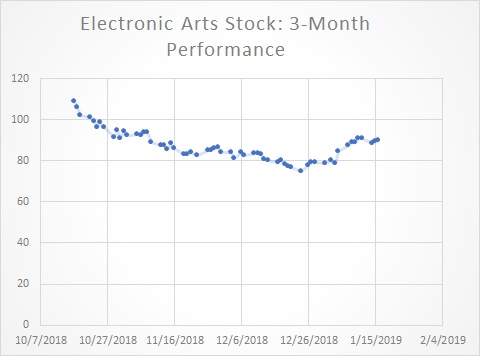 In our recent reports, we have written about the future of streaming game services.  DFC has an upcoming report that looks at the potential winners and losers as the industry moves to streaming models.  Once again, publishers like Activision Blizzard and Electronic Arts are not well-suited for the emergence of streaming game models.

Ironically, one traditional publisher that seems to be faring better than others is Take-Two Interactive.  For years, DFC has criticized Take-Two’s modest ambitions and inability to expand on its core franchise.  Now Take-Two is looking like playing it safe may be a smart strategy.  You can see our recent article reevaluating our opinion on Take-Two here.

Like other companies, Take-Two’s stock has taken a beating in the past 3 months.  It is down 20% since October.  However, the stock is about the same price as it was a year ago.  Activision Blizzard and, to a lesser extent, Electronic Arts have seen much more significant declines. 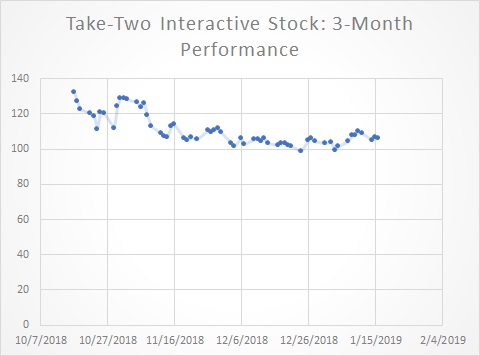 Of course, there is a second side of this issue.  What does the future hold for developers like Bungie? It is worth noting in June 2018, Bungie received a $100 million investment from NetEase.  But like Blizzard, the Bungie consumer is likely to be just as opposed to NetEase style business models.   For now, that is a subject for a future article.

For more information about The Business of Video Games report or other DFC Intelligence research go here. 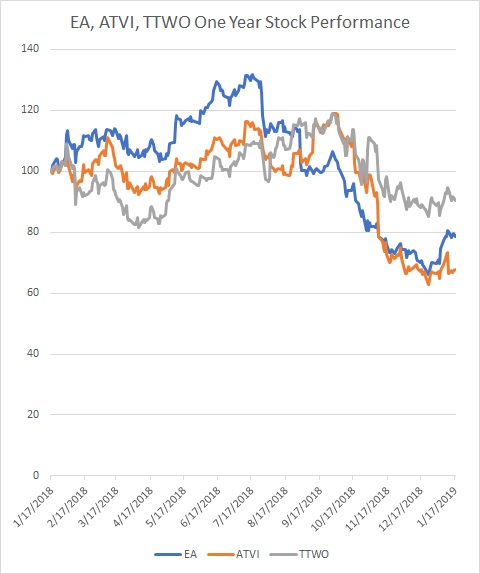 MARCH 6, 2013 • Technology is an inherently disruptive undertaking. At the very least that disruption is relentlessly incremental, and at most, seriously…

MARCH 26, 2012 ● Codemasters, Ltd. sealed a one-year agreement with Warner Bros. Interactive Entertatinment for the latter to undertake all sales,…