Nintendo is pretty good at doing a great deal with just a little.  Two years ago, the company focused on only one product at E3, Legend of Zelda: Breath of the Wild. At Nintendo’s E3 2018, Super Smash Bros Ultimate and Fortnite were the clear standout highlights.  Neither came as a surprise.

Fortnite on the Nintendo Switch is a big deal.  This game is massively popular with the Nintendo demographic.  The ability to play a version both on the television and in a portable version is a big deal.  It was not surprising that Fortnite came to Switch, but it was surprising it launched right during the June 12th E3 conference.

When it comes to Nintendo products, E3 is not the best place to get a true assessment.  The minimum age for E3 is 17, while the Nintendo audience leans heavily towards elementary and middle school kids.  Luckily DFC Intelligence maintains a panel of 7-15 year old kids just for such purposes.

First thing on the morning of the announcement, we immediately had some kids test out the new version of Fortnite for the Nintendo Switch.  What surprised us most was that everyone reported the download was easy and quick.  We thought this would be the first obstacle, but it appears the download is a relatively modest 2 GB.

It should be noted that, with our group,  the mobile version of games like Fortnite are generally non-starters.  Our testers did say that the Switch mobile version of Fortnite was not as good as playing on a large screen.  However, what really excited everyone was the option to play Fortnite in the mobile version.  The ability to quickly switch between small and big screen is what makes the Nintendo Switch so unique.  This is a big difference between just an iOS or Android version.

In terms of other major product announcements, Nintendo really had nothing new.  The big title, as expected, was Super Smash Bros Ultimate.  Luckily this is a very big title.  At E3 2001, Nintendo asked me about the upcoming GameCube and what I thought.  I said that Super Smash Bros Melee was going to be a monster hit.  That took the Nintendo people by surprise.

The first Super Smash Bros title launched in 1999 near the tail end of the Nintendo 64 lifecycle.  As such it flew a little under the radar screen.  However, in our testing, Super Smash Bros, along with Goldeneye 64, were the leading Nintendo titles for kids to play together.  As we predicted Super Smash Bros Melee went on to be the best-selling GameCube title ever.  Of course, overall the GameCube was a disappointment.

Super Smash Bros Ultimate will launch in December 2018, a month before the 20th anniversary of the launch of the franchise.  The original audience for this game is now in their late 20s and 30s.  Pokemon Go showed how the right product can bring that older audience back into the Nintendo fold.  To tap into that nostalgia, Nintendo will launch a retro GameCube controller.

Overall, Nintendo did not do a great deal to grow the Nintendo Switch base.  There were no surprises or new titles outside of indie products and the quirky Daemon X Machina from Japan.  In many ways, Nintendo’s E3 2018 was notable for what was not shown.  Not as much Pokemon, Yoshi or Metroid as expected.  Limited news on online.  No new major titles.

The Nintendo Switch is a system that continues to be a good first game system for younger children or a good second game system for everyone else.  Given the E3 announcements we feel very comfortable with our recent Nintendo forecasts. 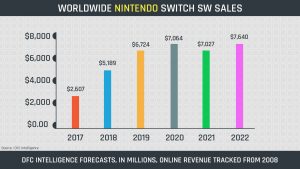