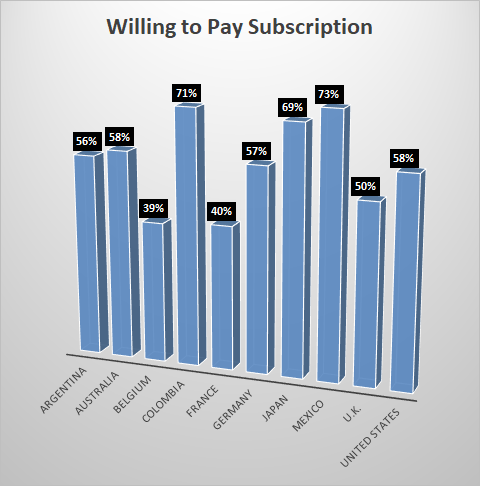 DFC Intelligence announced the results of a survey of global consumers focused on their expectations and preferences around interacting with streaming video content.

The survey of nearly 5,000 people aged 13 and older, commissioned by Genvid Technologies and conducted over the summer, found that nearly all (96%) consumers watch streaming video content monthly and an overwhelming majority (85.4%) would interact with streamed content if they could.

“We have been closely watching interactive experiments like Netflix’s Black Mirror: Bandersnatch and Facebook’s Rival Peak. This data highlights some of the key reasons Netflix recently committed to developing games with partners like the WWE, and Facebook just announced it will become a ‘metaverse company,’” stated David Cole, owner and principal analyst at DFC Intelligence. “The ability to directly interact with content should bring a larger, more engaged audience into streaming, cloud gaming, and the metaverse – and this is attractive to large platforms and content providers.”

Further, over half of respondents indicated a willingness to pay for the ability to interact with streamed content, either by subscription (51%), microtransactions (52%), or other methods. The summary survey findings can be found here on the DFC site.

“We have been looking at business model opportunities for concepts like cloud gaming, the metaverse and Massive Interactive Live Events (MILEs) for many years,” said Cole. “The technology is finally getting to the point where new categories are becoming mainstream. Furthermore, it appears consumers are now eager to not only try, but actually pay for, new content delivery forms.”

Among younger consumers, the desire to interact with livestream video content, and the inclination to pay for that ability, was even higher: about 87% of those under age 35 want to interact with what they’re watching, and 60% of consumers in that age group expressed a likelihood of paying via microtransactions for the privilege.

Other key data points from the survey included:

• Female respondents across all age groups were even more interested in interacting with livestreamed content and even more inclined to pay for it via microtransactions: 88.8% and 56.7% respectively.
• Across geographic regions, the survey found significant differences in consumers’ willingness to pay (via subscription) to interact with video content: U.S. (55%), Japanese (64%) and some Latin American (Mexico 72%; Colombia 70%) consumers were most inclined, while Belgian (38%) and French (39%) consumers were the least likely (and the only countries under 50%).
• 62% of all respondents cited socializing and interacting as a key reason to watch livestreams of other people playing video games (66% of females, 59% of males)

AUG. 22, 2012 • North and Latin America, plus the Asia Pacific markets saw the Microsoft Entertainment & Devices division shear $40 off the price of the Xbox Kinect motion…

AUG. 14, 2015 • Tencent Holdings Ltd. continues to be a leader in PC online games and is increasingly looking to grow its presence in the competitive mobile game business….

NOV. 6, 2014 • Development on the ambitious MOBA title Dawngate is being stopped by Electronic Arts. The F2P PC game, which was being developed by internal studio Waystone Games,…