Impact: Obviously, with four times as many people as the U.S., China is just getting started when it comes to PC penetration.  The good news for content developers is it is clear that Chinese consumers like their entertainment.  PC game industry sales in China surpassed the U.S. in 2009 and continue to soar far faster than most markets. The U.S. is now a distant second when it comes to PC games and the gap is only widening.  In emerging markets like China the PC is a necessity while platforms like dedicated console systems can be considered and expensive luxury for the well-to-do.  In this type of market the PC becomes a crucial entertainment device. 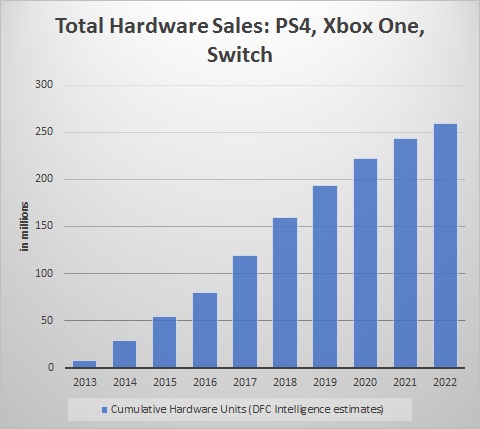 DFC Intelligence just released its latest forecasts for the video game console systems. Across the board, there was a strong performance for all platforms. The Nintendo Switch is expected to met…

SEPT. 25, 2010 • Zynga has purchased German game engine developer Dextrose. The latter is known for its Aves engine, which supports high-end gameplay in a browser window. Dextrose will…

FEB. 26, 2011 • After many starts and stops over the years, Rupert Murdoch is returning to the video game business. His News Corp.’s Digital Media Division purchased Making Fun,…