Last week many industry observers were surprised when Sony and Microsoft announced a deal to work together on cloud games/AI and other technology.  This deal was done at the highest level of both companies.  The big question of many observers is whether Sony and Microsoft are teaming up to fight a perceived challenge from newcomers like Google and Amazon?

The deal basically has Sony using some of Microsoft’s Azure cloud platform technology to develop game and content streaming services.   They are also exploring working together in semiconductors and artificial intelligence.

As usual, it is always good to read the actual press release before relying on the wide range of opinions (including the analysis of DFC Intelligence).  The actual announcement is vague.  The reality is this announcement is probably more symbolic than practical in terms of its impact on the near term for the game industry.

The biggest surprise was that this announcement was made very public between Kenichiro Yoshida, Sony’s CEO and Satya Nadella, Microsoft’s CEO.  Overall this is a big win for Microsoft, but it also shows Sony is getting back some of its strategic focus that was so strong back in the 1990s.

When it comes to cloud services, Google, Amazon, and Microsoft are the biggest players.  Now, all three are competing in games.  However, Sony, like the other players, is about much more than just games.  The official announcement mentioned games AND content streaming services.  It clearly was not a reaction to Google’s underwhelming announcement of the Stadia game service.

Sony has a great deal of content beyond games.  This includes its PlayStation Vue streaming service.  Despite, the name, Vue has little to do with games but is designed as a full replacement for cable television service.  It competes with services from Google and Amazon.

When you look at from a broad perspective, games are only one part of content streaming.  Large companies work together all the time on services that seem to compete with their own divisions.  In particular, Microsoft specializes in providing software and services to companies that have the potential to compete with other Microsoft divisions.

At this high-level of decision making the game divisions of Microsoft and Sony were not heavily involved.  An article in Bloomberg, in which DFC Intelligence analyst David Cole was quoted, indicates that Sony’s game division was unaware of the deal.  Of course, that is not a huge surprise.  Games are one of only many types of content Sony is looking to stream.

Overall the announcement of the partnership left most details unknown.  Right now it seems the game divisions of Microsoft and Sony are being left free to compete as usual.  The success of each respective company in the game business goes far beyond the core background technology.

In short, one should not read too much into the partnership announcement between Microsoft and Sony.  On one level it possibly indicates that Sony views Amazon and Google as bigger threats than Microsoft.  When one looks at from a macro perspective this is clearly the case.  Amazon and Google are content streaming giants.  This includes gamers that regularly use services like Twitch and YouTube.  Of course, it could be as simple as Sony viewing Microsoft having better technology.

As far as next-generation hardware, the announcement should have no impact.  This deal was really about the pipes and plumbing that will provide a whole range of services to consumers.  If Microsoft and Sony do a partnership on specific content like games it will be an entirely separate deal.

APRIL 30, 2013 •  A recently released report published by DFC Intelligence forecasts that games and applications developed for the Apple iOS will continue to dominate the growing… 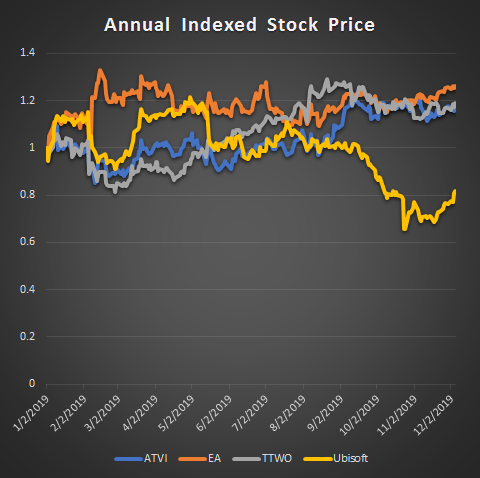 The last three months of the year have historically been make or break time for the video game industry.  However, as the…

OCT. 7, 2010 • Blizzard Ent. likes releasing World of Warcraft subscribers statistics during the month of October right before a new…