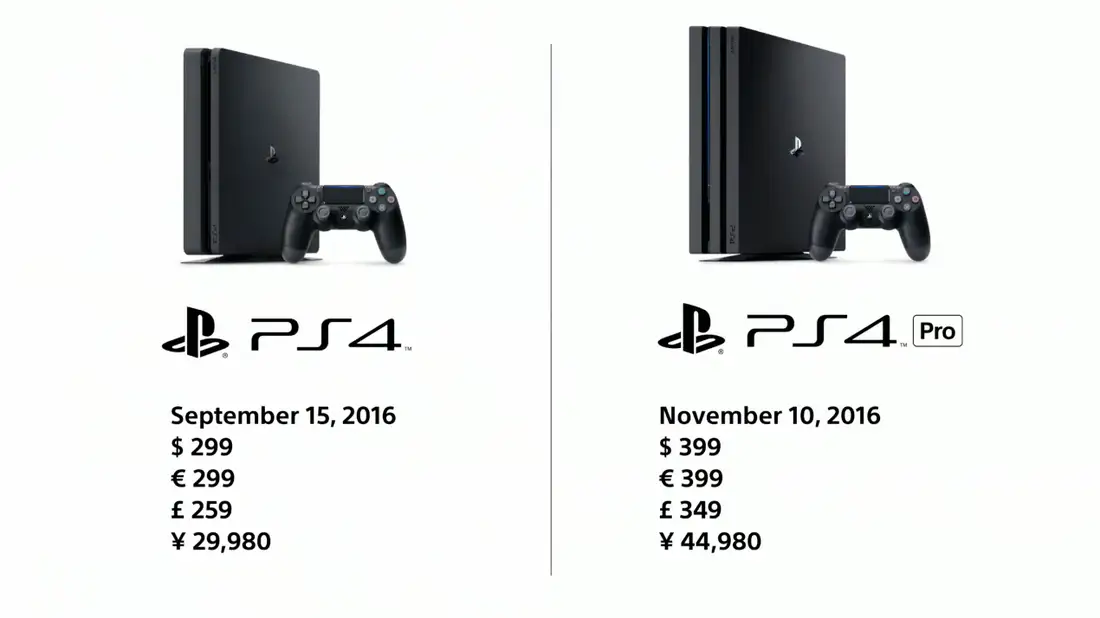 To support 4K displays, games and streaming video content, The PS4 Pro has a new GPU based on AMD’s recently introduced 14nm Polaris architecture. The new Sony console boasts 4.2 TFLOPS (trillion floating-point operations per second) versus 1.84 TFLOPS in the original PlayStation 4 and 1.31 TFLOPS in the Xbox One. The new AMD Radeon $329 RX 480 GPU for PCs is rated at 5 TFLOPs, while Nvidia’s $599 GTX 1080 is rated at 9 TFLOPS. Just like the Xbox One S introduced last month, the PS4 Pro adds High Dynamic Range (HDR) that supports a much wider range of colors. During the announcement, lead system architect for the PS4 Mark Cerny explained that PSVR titles can be played at higher frame rates and feature additional environmental detail on the Pro. Cerny also said that regular PS4 titles played on standard HDTVs at 1080P resolution will look better. Jagged edges that crop up on resource-demanding titles will be eliminated thanks to the Pro’s super-sampling and advanced anti-aliasing.

Impact: Nothing about Sony’s new hardware surprises us. That said, we are significantly impressed with how well SIE continues to execute this cycle with the PS4. Solid product focus, hardware design, marketing consistency and timing continue to be hallmarks for how Sony has established and grown PlayStation 4 console market share. This fall consumers are being presented a complete package of PS4 options to choose from. Whether it is an entry-level PS4, a high-performance PS4, or jumping into virtual reality with the PSVR, consumers do not have to wait to decide what option they want to choose. What’s more, Sony will soon sneak in an update that will add HDR support to all PS4s in circulation. Turns out the console’s HDMI processor could handle the extra burden all the time but was never told to. Theoretically there is nothing preventing early PlayStation 4s from displaying a 4K signal too, but the system does not have the horsepower to do so at acceptable frame rates. HDR is not a huge deal for gaming, but with all PS4s capable of supporting the extra colors, this is one more area where the Xbox One S cannot claim an edge.

Obviously, the biggest inducement to spring for the new Pro model is having the best platform for the PSVR, which arrives Oct. 13. Naturally, for those who do not already own a PS4, the Pro will deter sales of the new $299 model to all but budget-conscious families. What we like most about Sony’s execution is that there is no delay involved keeping consumers sitting on the fence. That has been our greatest criticism of Microsoft Corp. with the Xbox One S – that there is a full year of Xbox One Scorpio anticipation for buyers to mull over. Sony has simply laid all of its cards out at once – go budget or go bold… now.

And what of the Xbox One Scorpio? Microsoft is planning a beefier console that delivers 6 TFLOPs along with its 4K gaming. That’s a clear reason to purchase, yet we like that Sony has also got the PSVR as a second major reason to step up to the Pro. DFC believes the Scorpio likewise needs a second major purchase justification for consumers to better compete. The PlayStation 4 Pro will have a full year as the only high-performance console in an environment where Sony holds a commanding lead in market share. We suspect 4K gaming alone will not be enough to make a serious dent in SIE’s lead. No doubt Microsoft can market any number of special edition Scorpio bundles with special IP branding that will be appeal to a significant niche of Xbox stalwarts. This is definitely a strategy that can win retail sales rankings for several months following the Scorpio’s release. But for the long run we don’t see much positive change in the Xbox brand’s hardware fortunes from where they are right now.

The one issue where the Xbox One does hold an advantage is the new S version supports the play of Ultra Blu-ray movies. The new PlayStation 4 Pro does not support Ultra Blu-ray. DFC believes this will not be an issue for the vast majority of consumers. The stark reality is that high-end video formats are reaching a much more narrow audience. This is similar to what happened in the audio space where compressed MPEG formats were fine for the masses.

Of course, this point also gets at the challenges faced in the general game console market. There is the issue of general confusion over the optimal setup to play games and support the best video output. In addition, there is the question of how much effort developers wish to put into making content better for the audience that has the high-end setup. The movement to 4K is nothing like the movement from standard definition TV to HDTV in terms of mass consumer appeal.

So the reality is the hype over enhanced graphics in console systems is more of a marketing gimmick. In this respect Sony currently holds all the cards because they are in the here and now with platforms ready to go while Microsoft is telling consumers to wait another year. The big story remains that as in the 2013 launch of the current hardware cycle, Sony is still executing more effectively in the fall of 2016. At this point it is hard to see how Microsoft can compete this generation.

NOV. 3, 2014 • The PlayStation Plus streaming service has grown to 7.9 million subscribers, according to the Sony Corporation. The disclosure…

DECEMBER 23, 2010 • As both the Free-to-Play (F2P) and mobile game segments are both firmly established and generating revenue growth opportunities,…

MARCH 17, 2015 • After five years of ongoing discussions, Nintendo and DeNA Co. Ltd. have agreed to launch a mobile membership…

MARCH 11, 2011 • In an interview with the Wall Street Journal, Sony Corp. chief executive Howard Stringer said the promotion of…