APRIL 24, 2013 • In addition to his ongoing duties as the global president of Nintendo Co, Ltd., Satoru Iwata is taking the chief executive reigns at Nintendo of America from Tatsumi Kimishima. The latter is being promoted to managing director at the home office in Kyoto where he will oversee the Corporate Analysis and Administration, and General Affairs divisions. Kimishima has been CEO of the U.S. branch since 2006. Current Nintendo of America president Reggie Fils-Aime’s position will remain unchanged other than he now reports to Iwata. The gamemaker was not forthcoming as to why Iwata has taken on his new North American role, other than the move furthers the company’s unified global strategy of streamlining decision making and making Nintendo a more agile and competitive organization. One of the first changes Iwata announced in a financial results briefing was that Nintendo would not put on its traditional E3 press conference. The console maker will still exhibit on the show floor, but with no new hardware to tout, the decision was made to host a few smaller events that are specifically focused on the Nintendo software lineup for the U.S. market. Iwata said there will be one closed event for American distributors, and another closed hands-on experience event for Western gaming media.

The console maker announced a net profit of ¥7.10 billion ($71.7 million) for the fiscal year ending March 31, compared to a ¥43.20 billion ($434.3 million) loss in 2012. While an improvement, Nintendo fell short of the ¥14 billion ($140.7 million) in profit that had been previously forecasted. Despite the profit, net sales fell 1.9% to ¥635.4 billion ($6.4 billion). For the new fiscal year that started in April, Nintendo is forecasting a net profit of ¥55 billion ($553 million), and net sales of ¥920 billion ($9.3 billion). By March 31 the company had sold 3.45 million Wii Us instead of last January’s 4 million-unit estimate. The gamemaker had originally expected the system would sell 5.5 units globally. Nintendo is projecting 9 million Wii U units sold during the upcoming fiscal year (April 1, 2013 to March 31, 2014). Wii U software worldwide sales from the November launch to the end of March totaled 13.4 million.  Nintendo projects that 38 million Wii U games will sell during the upcoming fiscal year. The 3DS handheld also turned in less than projected sales for the year at 14 million units, down from the 18.5 million units Nintendo had expected to sell. The company has high hopes for a 3DS rebound that will see 18 million units moved by March 31, 2014. Expectations are even higher for 3DS software with Nintendo saying it expects 80 million units sold, a 60% increase.

Impact: In terms of 3DS sales North America was a clear underperformer.  This was especially true of the 3DS XL which sold significantly more in Japan and Europe than it did in North America.  The launch of the Wii U was a disaster and once again North America did not do well.  However, the Wii U struggled in all markets.  Nintendo is only forecasting 9 million unit sales for fiscal 2014.  In the same period of its lifespan (fiscal 2008) the Wii sold over 24 million units.  Thus Nintendo is forecasting Wii U sales at about 37% of Wii sales.

It seems clear that corporate headquarters in Japan is not happy with Nintendo of America’s performance and they clearly have reason to take drastic action.  NOA’s efforts the past couple years have been a catastrophe on almost every level.  Much of this was due to lack of execution on basic stuff like product marketing. There has been a great deal of turnover among NOA staff, especially in marketing. The Wii U was launched with minimal marketing support which was surprising given Nintendo’s great track record of promoting new products. Clearly a change in execution has been long overdue.  The damage done is enormous but there is the possibility of a turnaround.  The fact is that the general public is not really aware the Wii U even exists so it is an opportunity for Nintendo to almost start from scratch.

Iwata’s mandate is obviously to streamline oversight and execution at NOA. Not putting on an E3 press conference obviously fits within the streamlining goal, yet we wonder whether this move may well be counter-productive. Concentrating on more games for the Wii U and 3DS is wise, but we still are unsure how many mainstream consumers actually understand the compelling features of Nintendo’s latest hardware. In the same briefing that he announced the E3 changes, Iwata admitted Nintendo had not been able to solidly communicate the product value of Wii U to consumers, and even described how some people have the misunderstanding that Wii U is just Wii with a pad for games, while others even consider Wii U GamePad as a peripheral device connectable to Wii. The conclusion he draws is that there is no Wii Sports title for the Wii U that immediately communicates the value of the new system. That may well be a major contributing factor, but in our estimation, NOA simply has not told the Wii U story in any satisfactory way through marketing. 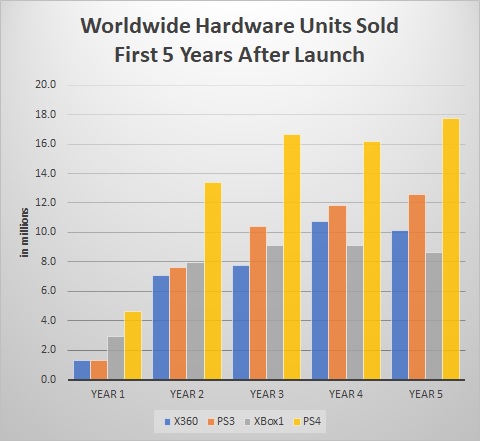 The year is young, but we are already looking towards the upcoming holiday season. There has been a continuing drought in terms of new big-ticket games being released. Right now,…