AUG. 12, 2011 • South Korea is one of the most advanced PC online gaming markets in the world thanks to savvy Internet users and modern infrastructure – fast broadband, payment solutions, and security to name a few. However, there have not been many comprehensive reports on this unique Korean gaming market in the United States.

With the growing acceptance of the free-to-play (F2P), micro-transaction model in the West, there is a lot more interest in the game market that popularized the online freemium business. It would be naive, however, to believe all there is driving the gaming market in South Korea is free-to-play alone. The Korean game business may be heavily weighted to the PC as a platform, but understanding the breadth of offerings available to Korean gamers needs to be explored for a complete understanding of how that market has developed and its implications for development of similar markets around the world.

In its upcoming report, The Game Market in Korea, DFC Intelligence aggregates actual revenue of PC and online game publishers in Korea from 2006 to 2010 and a five-year estimated forecast from 2011 to 2015. The focus of the report is on Korean game publishers and how they have used the Korean market as a base to expand a global business.

This article breaks out some of the key findings from the report. More information on South Korean Game Companies or other DFC reports and services is available here.

Market Snapshot
For most PC online game publishers in Korea, major revenue comes from subscription and/or in-game item sales and game licensing. For a small-and-medium publisher, those two are oftentimes the only revenue sources while top-tier publishers are trying to diversify by expanding into advertising, PC Bang (game-specific Internet cafes) subscription sales, and entertainment product development based on in-game characters as well as developing games on other platforms such as smartphones.

The Korean gaming market has been very indigenous. In this online-centric game market, most games have been traditionally home grown: Lineage, Maple Story, Kart Rider, GoStop, etc. Now the trend is changing. By partnering with a local publishing partner or acquiring a game studio, companies from the United States and China are entering the local market leveraging with already familiar games.

However, lack of proper localization, flexibility, and communication with a development team to accommodate local users’ preferences, as well as lacking a presence in PC Bangs, make it harder for these games to sustain Korean users.

NHN, a local publisher of WB’s Lord of the Rings Online, shut down the operation last May since its Open Beta Test in June 2008. High subscription price, few updates, and no sufficient viral market around PC Bangs attribute to the failure. Also, Ntreev Soft, a local publisher of Koei’s Three Kingdoms Online, closed down an operation in July 2010 after a short 9 month run since its OBT in November 2009.

DFC Intelligence examined all these possible revenue sources with aggregated total revenue from PC online game publishers from 2006 to 2010. In order to accurately size up the consumer market, we only selected subscription and in-game item sales revenues for the report.

It is worth noting that the reason we intentionally excluded other revenue sources in the equation is that NHN who operates the biggest search site, Naver, made more than 60% revenue from advertising on Naver. Usually, advertising revenue from game portal sites accounts for less than 10% of total revenue.

In-game virtual item sales from overseas accounts account for 77.9%. Most companies in Korea now develop games with international markets in mind and operate either with local publishing partners overseas, or with a self-publishing business model out of Korea.

Saturation Fears
There has been a concern that the Korean gaming market has reached a saturation point. It’s considered a success if a game reaches 20,000 Maximum Concurrent User (MCU), which typically generates 2 billion Won (US$ 1.8 million) per month. There is, of course, a blockbuster hit like Dungeon & Fighters, which recently reached 200,000 MCU in 2010. But most games barely reach 10,000 MCU, which the industry considers the beak-even point.

With an already saturated market where it’s hard to differentiate one game from the other, publishers are trying to tap into new game platforms or genres in order to find alternative revenue sources. At the center of these efforts are games for social networking sites or smart phones as well as browser-based games.

In Korea, the home-grown Cyworld, a subsidiary of SK Telecom, has been dominated the social networks for years. Now Facebook is catching up fast and game developers are trying to grab this opportunity. It’s still at early experimenting stage for most game companies to figure out the unfamiliar territory of Facebook.

On the other hand, browser-based games are getting into the mass market. Since the success of games like Tribal Wars (Bu Jok Jeon Jang) and 7th Dragon (Chil Yong Jeon Sul), publishers have rushed to publish browser-based games since 2009. Lower production costs and shorter project time compared to traditional MMO games enable publishers to enjoy higher ROI once the game operation reaches to a certain point. In general, it takes about four experienced programmers from four to six months up to one year to create a browser-based game within a 100 million Won budget (US$ 77,000). With quick monetization and boost in traffic in mind, publishers prefer Chinese games that already have been commercialized.

Game portals like CJ Internet’s NetMarble, NCsoft’s PlayNC as well as late comer Tongayang Online’s Gamehama use browser-based games as a stepping stone to attract more users to their sites.

Market Conclusions
DFC Intelligence predicts that Korean PC online game publisher revenue will continue to grow to 4.5 billion won or US$ 4.0 million in 2015 at a compound annual growth rate (CAGR) of 9.1% in the 2011 to 2015 forecast period. This growth will be thanks to increased oversea sales, more advanced monetization formulas, and continuous efforts to introduce AAA titles from major developers.

OCT. 29, 2010 • Microsoft’s Entertainment and Devices division rides into the holiday season with good tidings. Xbox 360 console sales were up 38 percent for the quarter ending Sept….

OCT. 7, 2010 • Blizzard Ent. likes releasing World of Warcraft subscribers statistics during the month of October right before a new expansion. Two years ago this month the developer… 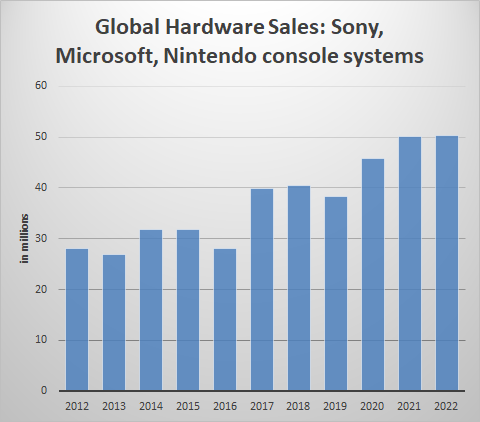 The latest console forecasts for DFC Intelligence have been lowered to take into account shortages that are expected to last throughout the year. The good news is demand remains at…

SEPT. 17, 2010 • A survey by Credit Suisse discovered 37% of Netflix subscribers aged 25 to 34 substituted Netflix streaming option for their pay television. Similarly, about 30% of…