The Nintendo Switch has been a strong success story in 2019.  The September launch of the Nintendo Switch Lite doubles down on the portable element of the system. There is now a serious question about whether the Switch will eventually join the elite group of video game systems that have passed 100 million units in hardware sales.

DFC Intelligence has been cautious about forecasting Nintendo sales because every year since 2008, sales have fallen short of estimates.  In 2018, the Nintendo Switch met DFC forecasts but only because of a strong December.

So far 2019 sales for the Nintendo Switch have been strong.  However, over two-thirds of sales will occur in the final months.  In the latest game system forecasts, DFC forecasts that the Nintendo Switch will sell a total of 17 million units in 2019.  This will put it close to the 50 million-unit mark lifetime.

The only video game systems that have sold over 100 million units are the PlayStation 2, the Nintendo Wii and now the PlayStation 4.  The Switch has a long way to go to reach that mark, but it is possible.

Among our test group, Nintendo’s popularity has soared in the past year.  The major driver of the Switch is its portability feature.  Younger consumers in particular love this feature.  Along with Minecraft, Nintendo has become the surprise success of 2019 among a younger, jaded U.S. audience.

The Nintendo Switch Lite is a portable only $200 version of the Switch.  Nintendo portable devices can sell far more than their console counterparts.  The Nintendo DS sold over 150 million units.  Its successor the 3DS has sold over 75 million in the smartphone era.

With a portable system, there is the ability to sell multiple units to a single household.  If you are a family with children, each child needs their own system.  The Nintendo Switch Lite is clearly targeted towards that demographic.

In the end, DFC forecasts that the Switch, including the Switch Lite, will fall just short of the 100 million mark.  Of course, much of this will depend on the new systems from Sony and Microsoft.

The challenge Nintendo faces is that the company is purposely self-limiting.  Nintendo wants to sell software for a premium price and thus is very strict about digital rights management.  Online services and data management are difficult on Nintendo platforms.

Not surprisingly many of the early reviews on the Nintendo Switch Lite focus on the difficulty of content management.  Today’s consumer demographic loves portability.  However, they also have a limited tolerance for challenges when it comes to accessing games.

Overall, these are fairly small problems for Nintendo.  The larger problem will be competition.  Nintendo investors worry about Apple, Google and smartphones.  However, the real competition is devices from Sony and Microsoft.

Nintendo works in a more high-end niche of consumers willing to pay for dedicated video game hardware.  There are now over 300 million consumers in that “niche.” Nintendo still has plenty of room for growth.

Long term Sony and Microsoft need an answer to the portable feature.  The track record of both companies in that area is weak.  Recently with the PlayStation Vita, Sony had a major failure trying to create a portable/console hybrid.  Nintendo’s own Wii U showed the difficulty and learning curve in trying to go in this direction.

In terms of hardware units, the Nintendo Switch is expected to be the best-selling system of both 2019 and 2020.  It should eventually become one of the top-selling game systems of all-time.  However, the Switch will only be hitting the 50 million-unit mark at three years after launch.  Reaching the 100 million-unit mark will be difficult.

When talking with investors, it should be noted that a focus on gaining more value per user is key to success.  Furthermore, making sure these users provide long-term value is crucial.  Many companies are focused on nickel and diming consumers with free-to-play and loot box mechanics.  That can be good for the short-term but can hurt when it comes to bringing consumers back.

Nintendo can charge a premium because they provide value for the consumer.  They can be an expensive product, but they also provide quality.  So far Nintendo has avoided going for the cheap buck.

The portability of the Switch expands the options and allows key portable Nintendo franchises like Pokemon and Fire Emblem to reach their intended audience, even in the smartphone era. 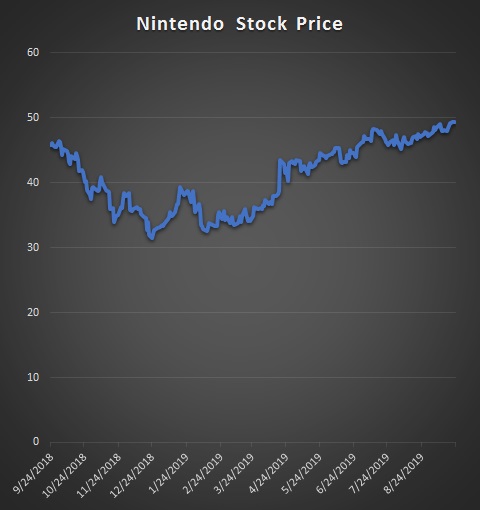 Nintendo stock has been a roller-coaster ride in the last few years.  During the first 9 months of 2019, the stock is up almost 50%.  Investors are currently coming back around.

Nintendo’s stock price still trades largely on the perceived competition with other mobile devices.  The reality is that Nintendo is in a different market.  The company is likely to continue to struggle to break into the mobile device market.  However, there is still a great (and growing) market for premium dedicated devices.

If you would like to schedule a call with a DFC Intelligence analyst to discuss Nintendo or another issue in the video game industry contact us.

OCT. 7, 2014 • Having already amassed sales of 1.42 million in Japan since September 13, Super Smash Bros. 3DS was released in the Americas, Australia and Europe on October…

MAY 9, 2016 • Nvidia Corp.’s first GPUs based on its new Pascal architecture were unveiled on May 6 and the firm demonstrated performance specifications that exceeded its $1,000 top…