Steam is on Top for Digital Sales, but Epic Games Store is Gaining Traction

To look at the potential for streaming games, DFC Intelligence commissioned a quick survey of 1,000 gamers.  We used our panel of younger core gamers from a global pool (not including Asia).  Among the many questions, we asked was where consumers buy digital games.  Epic Games Store clearly has strong potential based on the initial results.

Of course, Steam is the number one service for buying PC games online.  A massive 88% of respondents have used Steam to buy digital games.  However, in second and third place respectively were Electronic Arts’ Origin store (42%) and the Epic Games Store (33%).

The Origin store has been around since 2011, but Epic Games Store is a brand-new platform.  We noted that both Electronic Arts and Epic ranked fairly low in terms of brand perception.  Steam and Valve, on the other hand, ranked very high.  However, much of this was because of limited recognition.  Among gamers, Epic had a 42% favorable rating, higher than EA at 38%. 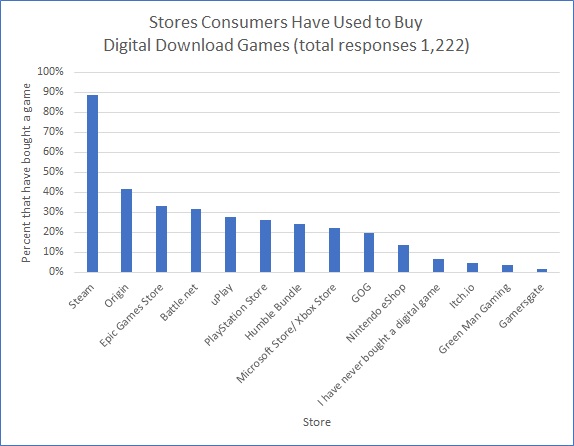