After the Game Developer’s Conference, DFC Intelligence wrote about how Google Stadia will face many challenges trying to make an impact in the gaming community.  However, our most recent survey confirms what we have been seeing for a long time.  The Google brand is quite strong among video gamers.

To look at the potential for streaming games, DFC Intelligence commissioned a quick survey of 1,000 gamers.  We used our panel of younger core gamers from a global pool (not including Asia).  Among the many questions, we asked were questions about how companies and brands were perceived.

The focus was on whether a brand/company was seen as highly favorable, favorable, neutral/ no opinion, unfavorable or highly unfavorable.  The good news was that all the companies came out in a positive light.  Apple was the only company where negative attitudes outweighed positive attitudes.

The attitude toward Google and YouTube was very positive.  The only companies/brands that came out higher were Steam/Valve and Nvidia.  This is really not surprising as Google has always had strong ratings in our consumer opinion polls. 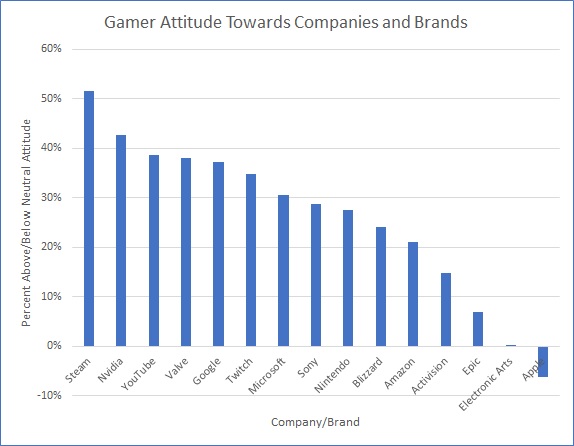 The challenge for Google will be turning those high favorable opinions into a robust product for gamers.  Google is primarily known for its free services.  For gamers, YouTube is a leading service that has no cost.  Offering free services will equate to strong favorable opinions so not much can be read into the high opinions when it comes to the potential for paid services.

Trailing the bottom of the list with Apple were the larger game publishers.  Gamers are more neutral towards Activision and Blizzard, Epic Games and Electronic Arts.  This was not surprising, and it should be noted that all these companies had fairly positive ratings.

One surprise was that Amazon did not do well as expected.  However, on further analysis, this is mainly because Amazon is not as widely known internationally.  More respondents expressed a neutral opinion on Amazon. 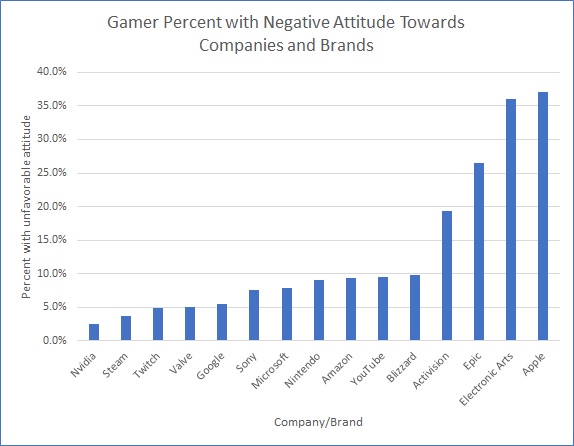 It should be noted that this survey focused on international core gamers in a 13 to 30-year-old age range.  The results will be different when we run the survey to gamers in specific markets like the United States.

Right now, the field work on the subject of streaming and cloud gaming services is still a work in progress.  When looking at the potential for a game focused service you need to look at several different demographics.  In addition, there are already plenty of services on the market and some of DFC’s surveys are focusing on the consumers of those services.

In the coming weeks, we will be presenting some more results from our surveys.  If you would like more information about these surveys or other DFC Intelligence products please fill out this contact form.