When most people talk about the video game industry, they look at consumer spending on games.  However, this is only a portion of the overall video game ecosystem.  There is almost as much spending on the hardware to play video games as there is on the actual games themselves.  In the recent DFC Intelligence PC Game Hardware Forecast report, it is estimated that by 2023 PC game hardware spending will reach $70 billion.

For the past couple of years, DFC Intelligence has tracked gamer spending on PC hardware. This is spending for high-end PCs dedicated mainly to playing games.  These PCs often have performance CPUs and GPUs from companies like Intel and Nvidia.  In addition, they are likely to have custom case, cooling systems, memory, power supplies, monitors and other accessories.

Estimating the size of this market is admittedly an inexact science.  PC systems are utilitarian devices that can be used for many purposes.  Games are likely only one of multiple uses for a PC.

Furthermore, games are a major driver of more regular hardware upgrades.  Spending on upgraded cooling systems, for example, is largely driven by the high-performance requirement of games.  In recent years this tracking has become somewhat harder with the rise of high-end PCs used for cryptocurrency mining.

In 2019, PC game hardware spending is expected to reach $48 billion.  This is expected to climb to $70 billion by 2023.  DFC Intelligence breaks PC hardware into several segments.  The fastest growing category is laptop gaming systems which is expected to grow 137% from 2018 to 2023. 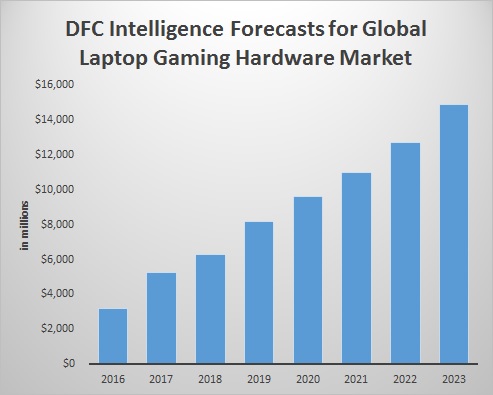 For an initial look at the industry from a supplier perspective, we urge you to check out the segmentation that DFC Intelligence did in conjunction with Venture Beat and Atlas Technology Group. It is available for free on the Venture Beat website. This segmentation lists the major companies in each industry segment.