The successful launch of the Nintendo Switch in March 2017 took many in the game industry by surprise. Of course, the same reaction happened over a decade before with the launch of the Nintendo Wii. The latest DFC Intelligence brief on the Switch, forecasts continued success for the system. However, these forecast come with warnings that the Switch is still a fairly modest player in the overall video game landscape. Right now, the rush to develop content for the system is greater than its success warrants. 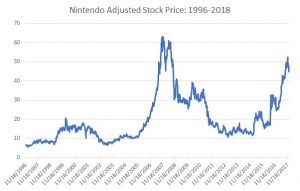 The big Switch games from Nintendo like Legend of Zelda: Breath of the Wild, Mario Kart 8 Deluxe and Super Mario Odyssey had unprecedented sell-in to the switch installed base. This is great news for Nintendo, but not so much for third parties. The Switch is one of Nintendo’s most expensive systems ever. It costs $300 and that does not include a game. An extra controller will set you pack $70 or so, while an official 64 GB SanDisk microSD card is currently at $50 (enough to hold only a few games).