SAN DIEGO, CALIF. – A series of new reports from DFC Intelligence examine growth prospects for the worldwide video game industry.  The reports forecast that the global video game industry will surpass $100 billion in 2018.  This includes revenue from PC games, console games and mobile games on smartphones and tablets as well as spending on dedicated game hardware.  It does not include spending on gaming PCs, tablets or other multi-purpose devices.

While industry growth remains solid, DFC has actually slightly lowered its forecasts from last year.  This is due to slowing in all segments but specifically the impact of mobile games on emerging market growth.  Mobile games continue to grow in popularity but have been difficult to monetize for products that do not use a virtual item model. 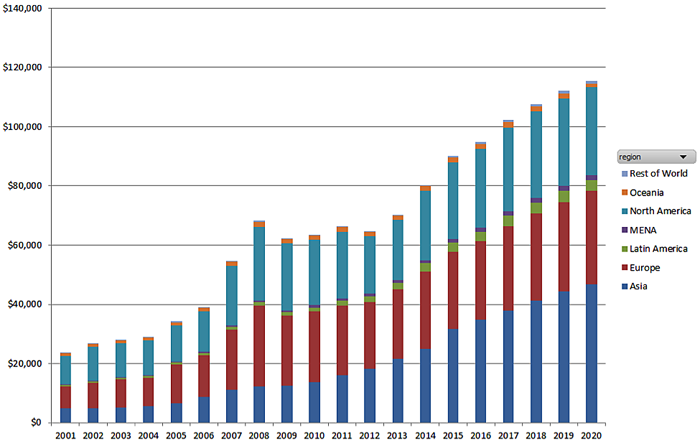 Of course, the game industry remains extremely fragmented and the key to understand business potential is to examine individual segments in more detail. Recently DFC released a 300 page report, The Business of Video Games, that looks not only at revenue opportunities but also profit potential of key industry segments. This includes the rapidly changing distribution and publishing infrastructure that is resulting in major new opportunities for small publishing teams and indie developers.

In the Business of Video Games report, DFC Intelligence ranked companies based on their market impact. Google and Apple were listed as the most important companies in the space mainly because of the way they have impacted distribution and consumer reach for third party companies. This is in contrast to several years ago when the console manufacturers and retail distributors were the most important companies in the space.

DFC is forecasting continued strong success for the Sony PlayStation 4, which has emerged as the clear leader among dedicated game systems. The launch of the PlayStation VR in fall 2016 is expected to be major driver for high-end VR system sales. The new reports also forecast a comeback for Nintendo as they launch new hardware. As Microsoft has stumbled in the game market in recent years it gives Nintendo an opportunity in both console and portable hardware.

The new reports are available individually or as part of a bundle. They include:

Video Game Consoles: Market Forecasts 2016:  This report analyzes the prospects for the major game console systems and forecasts how revenue will be split between digital and physical sales. Five-year forecasts are broken down by region.

The Business of Video Games: This 300-page report analyzes the value chain of the game industry and how revenue is split among development, publishing and distribution. There is also a look at other sources of industry revenue including hardware accessories, service providers, game information, esports, IP licensing and other ways companies can profit from the growing global base of game consumers.

NEW DFC REPORT: THE BUSINESS OF VIDEO GAMES
MICROSOFT PULLS A WII U WITH XBOX ONE